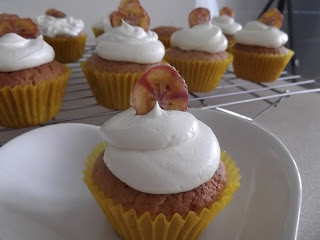 This is the banana cupcake u're gonna dream of. The cupcake itself was so moist and the cream.. the buttercream.. oohh my.. oh my.. where have i been???? can't believe there's a buttercream that has so silky, so light, and sooo.. ice cream!! hahaha.. yess.. what can i say.. it feels like i'm licking the ice cream. The original recipe use vanilla bean (ofcourse!), and mine use vanilla paste (from Nielsen Massey) and when it's time to whip the butter, i add the Rhum Jamaica to sharp the flavor. I'm so sooo.. sorry i couldn't make the resume for the buttercream on my own version and how it works in my kitchen.. i do have but i'll complete it later on. But for buttercream lovers who wants to see the sneak peak how it's made, i'l' still attach the original recipe link. Enjoy..

The Banana Cupcake originally from the reference use the vanilla pastry cream, but even though i'm convinced as a pastry cream lovers but i'm not really get into it for the cream to be married with this banana cupcake. So.. i choose the sliky and smooth German Buttercream to accompanied the cupcake.


To Make the Banana Cupcakes:
Preheat the oven to 325 degrees F. Line two 12-cup cupcake pans with paper liners.
Whisk together the flour, baking powder, baking soda, and salt together into a large bowl and set aside.
In the bowl of an electric mixer fitted with the paddle attachment, beat the butter and shortening together on medium speed until creamy, 3 to 4 minutes. Add the sugar and vanilla and beat on medium speed until fluffy, about 3 minutes. Scrape down the bowl, add the eggs, and beat until just combined. Scrape down the bowl again and add the bananas. Beat until just combined. Turn the mixer to low. Add the flour mixture, alternating with the buttermilk, in three additions, beginning and ending with the flour mixture. Scrape down the bowl, then mix on low speed for a few more seconds.
Fill the cupcake liners about three-quarters full. Bake for 20 to 25 minutes, rotating the pans halfway through the baking time, until a toothpick inserted in the center of a cupcake comes out clean. Transfer the pans to a wire rack and let cool for 20 minutes. Remove the cupcakes from the pans and place them on the rack to cool completely. 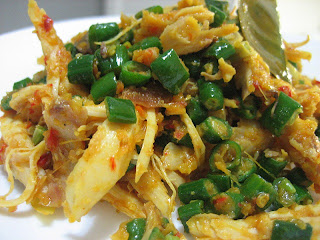 Warning! it's reaally hot and spicy dish, so u better watch out to try this one.. but for spicy & burning lover.. here's yoour challenge.. hahahaha.. got this recipe from Keluarga Nugraha Ayam Betutu, and modified by me base on my friend's Chicken Lawar authentic from Bali.. hihihi.. many influences, huh?? :)
actually i just skip the "Gula Jawa" from orignal recipe Keluarga Nugraha, but i didn't follow almost all the measurement of it. And for Red Chili Peper (Cabe merah ) i just substitute with "Cabe rawit" that is similar with Thailand chili pepper in US.. lots of them!! :D
So feel free to modify base on your own taste favorite or just copy by the book from the original one.
For the shreded chicken u can grab from your local store bought Roasted Chicken like i did, or just make from scratch use any kind of chicken recipe.
basicly.. for the spices & herbs, u need to unload all your stuffs from fridge or kitchen storage coz it need almost all of them.. hahahaha.. but trust me, it's worth it!
i never measure the ingredients so honestly i have difficulty to write the recipe down and since everbody can put the chicken as much as they like.. so.. hhhmm.. i will assume that this recipe fit for 1 whole chicken, ok.
(Indonesian version)
Bahan-bahan:
1 ekor ayam kampung, cincang kasar
kacang panjang, potong kecil-kecil
4 lembar daun salam
4 daun jeruk
2 batang sere, rajang kasar
2 cm lengkuas yg batangnya besar, sebagian di chop sebagian di geprak aja
minyak untuk menumis
Bumbu halus:
18 bw merah
10 bw putih
2 cabe merah + rawit yg banyak
6 kemiri
1 tsp terasi
1-2 Tbsp jahe cincang
1 tsp kunyit bubuk
½ tsp (kurang) kencur bubuk
2 tsp ketumbar
½ - 1 tsp jinten
garam
gula
merica dikit
Tumis semua bumbu halus dan herbs nya dengan minyak secukupnya. Masak sampai wangi, masukkan kacang panjang, tumis sebentar aja, masukkan ayam, aduk sebentar, angkat dari api.
Note dari versi asli Bali style:
Kalau versi aslinya, kacang panjangnya dibiarkan mentah.
Campur bersama potongan ayam.
Masukkan tumisan bumbu2 kedalam adonan sayur dan ayam tadi.
Aduk rata. Sajikan
Posted by Orek-orek'an ku at 10:10 AM No comments: 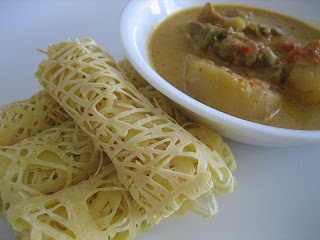 finaallyyy made it.. yaaaaaayy!! my husband got breakfast with this crepe with Chicken Curry i made, and it was a blast!! he loved them!! i have 4 kinds of the Roti Jala recipe and this is one of them..
Yield: 30 pcs (17cm diameter pan skillet)
2 cups flour
2 eggs
2 cups minus 2 T thin coconut milk (the consistency of skimmed milk) **use 1C milk + ½ C water + water as needed, coba dulu dikit2.
1 tsp salt
1 tsp tumeric powder
Note : you may have to adjust the consistency of the batter to make it thinner by adding water a tablespoon at a time if you find that it is too thick to flow out from the spouts smoothly.
Sift flour into a medium bowl. Add salt and tumeric powder. Break 2 whole eggs into the flour and pour in half the coconut milk. Mix with a whisk adding the remainder of the milk slowly until the batter is smooth and free of visible lumps.
Pour the batter through a fine sieve into another bowl to ensure a completely lump free and smooth batter. This is essential otherwise you may find that the spouts may get clogged by tiny lumps of undissolved flour. Pour into a jug for easy handling later.
Heat up a cast iron griddle or a heavy non stick pan. Swipe some oil on its surface using a kitchen paper folded into a pad. Let the surface heat up again and lower the flame to small-medium.
Place the roti jala mould on a flat and wide bowl so that it stands upright and will not topple over. Pour the batter from the jug into the mould about halfway up the mould.
Bring the mould and its supporting bowl near to the griddle and lifting the batter filled mould, by holding it over its top with all five fingers rather than by its handle, quickly make small circles over the griddle by twirling your wrists clockwise and at the same time moving your hand along so that you will be forming a larger circle made up of those small circles. The final small circle will be in the centre. The first piece will always be sacrificial.
Let the crepe cook and firm up. About 1 -2 minutes.
When done remove the crepe with a spatula and place on a flat plate. These crepes are usually about 8 inches in diameter.
Fold the crepe or roll it up as you like. I usually do this when I have another crepe cooking on the griddle.
Repeat the process until all the batter is finished.
u can find the step by step picture on the source
Posted by Orek-orek'an ku at 8:23 PM No comments: 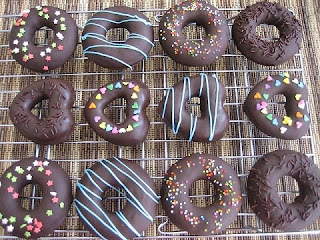 my doughnut pan arrived last night, and i just can't wait to make the doughnut!! well.. actually my youngest daughter keep asking me to make doughnut since she felt in love with baked doughnut i made last time.
i got the recipe from the package of the pan and it's Wilton.. yeaahh.. never disappointed with Wilton so far.. so it's good to try though. Lucky me that my kids looovveee them!! the doughnuts were soft, quite moist and so chocolaty coz i add with chocolate pasta too...**cheating!!** hahahaha...
here's the recipe:
BAKED CHOCOLATE DOUGHNUT
by Wilton
yield: 24 doughnuts.
1 ¾ cups cake flour, sifted
¼ cup cocoa powder
¾ cup granulated sugar
2 tsp baking powder
1 tsp salt
¾ cup buttermilk (i substitute with ¾ milk + 1 tsp apple cider vinegar)
2 eggs, lightly beaten
2 Tbsp vegetable oil
1 tsp vanilla extract
Preheat oven to 425F. Spray doughnut pan with nonstick cooking spray.
In large mixing bowl, sift together cake flour, cocoa powder, sugar, baking powder and salt.
Add buttermilk, eggs, oil and vanilla; mix gently until just combined. Just use spoon to mix all the ingredients, and don't overmix.
Fill each doughnut cup approximately ½ full. I use the spuit plastic bag to pour the batter into the pan.
Bake 4-5 minutes or until top of the doughnut spring back when touched.
Let cool in pan for 3 minutes before removing. Repeat with remaining batter.
Chocolate Topping:
Melt your choc chips in microwave. Or melt the choc chips or chocolate compound in a bowl over the hot water.
Pour the chocolate glaze on each doughnut or just dip the doughnut into the chocolate glaze batter.
Decorate with sprinkles or any other candy.
Posted by Orek-orek'an ku at 8:15 PM No comments: 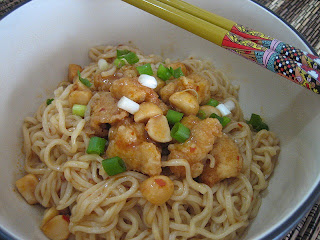 Actually the original recipe use linguini but i prefer use asian noddle coz my son doesn't really like pasta food. And i always love chicken kung pao, either with rice, noddle or even italian pasta. So i really relief when i made this recipe and so satisfy that it's just fit with my taste!! still from the source that i so fond of :)
And.. as usual, i modify this recipe just only bcoz i want more and more sauce so i add more liquid in it and use Black Vinegar rather than Red Wine Vinegar. I like the tanginess of the Black Vinegar that give me a chinese food sensation. But it's up to you to scrabble the recipe or just use exactly like the original one.
Ingredients:
1lb boneless skinless chicken breasts
½ cup cornstarch
oil (for deep frying)
1lb uncooked linguini noodles
Sauce:
½ cup chicken broth
2 tablespoons cornstarch
¾ cup soy sauce
½ cup dry sherry
3 tablespoons red chili paste with garlic
¼ cup sugar
2 tablespoons red wine vinegar
1 tablespoon sesame oil
¼ cup garlic (minced)
1 cup dry roasted peanuts
1 cup dry roasted peanuts
1 cup green onions (sliced)
Cooking Instructions:
Step 1: Bring a large pot of salted water to a boil, add linguini and cook according to package directions. When linguini has finished cooking drain and set aside.
Step 2: While noodles are cooking, toss cut up chicken pieces with ½ cup of cornstarch until evenly coated. Heat oil in a deep fryer to 375 degrees. Deep fry chicken bits in batches until golden brown and fully cooked (the internal temperature has reached 165 degrees). Drain on paper towels.
Step 3: In a bowl whisk together chicken broth, 2 tablespoons of cornstarch, soy sauce, dry sherry, red chili paste with garlic, sugar, red wine vinegar, and sesame oil.
Step 4: Heat 2 tablespoons of vegetable oil in a wok or fry pan over medium-high heat. Add garlic and stir fry for 15 seconds. Pour the sauce mixture into the pan. Stir in peanuts. Bring to a boil, reduce heat and simmer until thickened and bubbly.
Step 5: In a serving bowl add cooked linguini and chicken bits. Add the kung pao sauce mixture. Add green onions and toss everything together.
(Makes 4 Servings)
Posted by Orek-orek'an ku at 4:46 PM 1 comment: