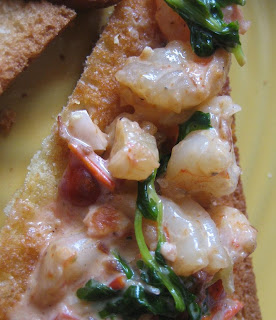 
Season the shrimp with salt pepper.
In a medium skillet, heat 3 Tbsp of oil oer medium-high heat.
Add the shallots and garlic and cook until sof, about 2 min.
Put the shrimp into the skillet , cook until turns pink about 3-4 min.
remove the shrimp and chop into ½ inch pieces . Set aside.
In the same skillet, add the tomatoes and season with salt pepper.
Cook over medium-high until tomatoes start to soften about 4 min.
Turn the heat to high and add wine, cook for 2 min.
Stir in stock and cook until moist of the liquid has evaporated , about 2 min.
Remove the pan from heat, and add the tarragon, arugula , mascarPONE cheese and chopped shrimp.
Stir until the mixture is creamy . Season with salt pepper to taste.
Put the topping over the toasts bread.
Grab the original recipe from this S I T E
Posted by Orek-orek'an ku at 5:53 PM